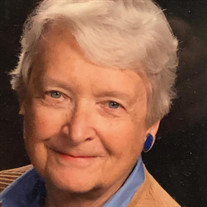 Edith Virginia Freeman Patton of Matthews, NC died on January 11, 2022. She was born on September 21, 1934 in Pulaski, VA the only daughter of Frances Orr and Daniel Ralph Freeman. Edith was born into a clergy family who loved music. As the youngest of 3 children, she grew up “conducting” the family band. Edith took piano lessons for many years, and enjoyed sports, lettering in Women’s Basketball in both high school and at college. She graduated from Farragut High School in Knoxville, TN in 1952 and King College in Bristol, TN in 1956 receiving a BA in History. Edith was very active in music at King College where she organized and conducted an octet which traveled and performed in Virginia and Tennessee. Edith married James William “Bill” Patton. They were married for 26 years and had 5 children. Edith often stated that she learned so much from her children, and that she was “a parent in residence for 28 years.” While living in Alabama she organized and led a Mother’s Day Out program and drove a school bus. Edith’s faith journey was a guiding force in her life. She was always very active in her church community as a “preacher’s kid”, a clergy spouse, and as a church executive. She began her professional church vocation in the Presbyterian Church (USA) as a Hunger Action Enabler in Roanoke, VA. She returned to school in her late 40’s and earned a Master’s Degree in Adult Education from Virginia Tech in Blacksburg, VA. Edith held many leadership positions in the church over a 20 year span serving in Presbyteries in Virginia and Ohio, and as an Interim Synod Executive for the Synod of the Covenant. She was also very passionate about sharing her knowledge in hymnody and congregational singing. Studying, teaching and singing hymns with others brought her great joy. Also central to Edith’s life was her commitment to and advocacy for social justice issues. She worked on behalf of, and educated others about women’s rights, socio-economic justice in Central America, and hunger and poverty issues around the globe. Edith loved meeting and talking with people. She loved to find “small world” connections with others. Edith is survived by her 5 children: John Patton, Stuart Wilson-Patton (Mary Elizabeth), Margaret Anna Patton Sharp (Ed), Jean Patton Rochelle (Jim), Beth Ann Patton (Edward Patte); 9 grandchildren – Tyler Rochelle, Jamey Wilson-Patton (Madalyn), Rebecca Rochelle, Virginia Wilson-Patton, Hannah Wilson-Patton, Daniel Sharp, Benjamin Patte, Martison Sharp, Joshua Patte; and 2 great grandchildren – Edwin, and Eden Wilson-Patton. Edith was predeceased by her parents and her brother David Freeman. She is survived by her brother Robert O.Freeman. In lieu of flowers contributions may be made to Bread for the World, Church World Service, or the Hymn Society of the United States & Canada. March 19th Interment at 11:00 am at Steele Creek Historic Cemetery and 2:00 pm Memorial Service at Matthews Glen Retirement Community. Those not able to attend can watch a live stream of the service by following this link: https://vimeo.com/682948324/1661bb8839

Edith Virginia Freeman Patton of Matthews, NC died on January 11, 2022. She was born on September 21, 1934 in Pulaski, VA the only daughter of Frances Orr and Daniel Ralph Freeman. Edith was born into a clergy family who loved music. As the... View Obituary & Service Information

The family of Edith Freeman Patton created this Life Tributes page to make it easy to share your memories.

Send flowers to the Patton family.