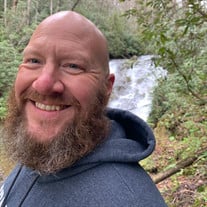 Edward Scott Brown On Friday, April 29, 2022, Scott Brown, beloved husband and father to three children, passed away at the age of 49. He is survived by his wife, Jenny, his three daughters, Katelynn, Leanne, and Ella, his granddaughter Selah, his mother Margret, his sister Benita, and several nieces and nephews. Scott was born on November 21, 1972, on Andrews Air Force Base in Maryland to Margaret and William Brown. On May 9, 1998, he married his high school sweetheart Jenny. They raised three daughters, Katelynn, Leanne, and Ella. He was “Pop-Pop” to their granddaughter Selah. He earned his Bachelor’s degree in Business from Wingate University in 1996 and later returned to earn his Bachelor’s in Education at UNC Charlotte in 2011. He taught middle school education for 12 years and coached volleyball each season. Teaching was his passion and he cared deeply for his students and volleyball players. Scott enjoyed kickboxing with his family and friends and earned his red belt at Sparks Mixed Martial Arts. Star Wars-themed nick-nacks and mugs frequented his desk. A healthy mix of rock and Christian music played on his speakers while precision cutting the grass. Scott is known to many as an amazing friend, teacher, and coach full of sarcastic jokes and quick wit. His family knows him as a kind father and the “go-to” parent for help with math homework. His pride in his granddaughter shows greatly in his pictures with her. His love for his wife was seen by many, in big ways with a surprise birthday party, and in little ways by making her coffee every morning. In lieu of flowers, the family asks for donations towards the Coach Scott Brown Memorial Scholarship. Follow the links below to find more information. http://coachscottbrown.com/ https://www.facebook.com/CoachScottBrownMemorial/

Edward Scott Brown On Friday, April 29, 2022, Scott Brown, beloved husband and father to three children, passed away at the age of 49. He is survived by his wife, Jenny, his three daughters, Katelynn, Leanne, and Ella, his granddaughter Selah,... View Obituary & Service Information

The family of Edward Scott Brown created this Life Tributes page to make it easy to share your memories.