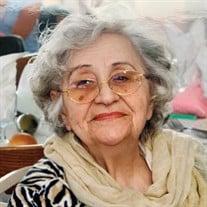 Elena (Dorina) Szep, beloved wife, mother, mother-in-law and grandmother passed away at home, surrounded by family, on 3/11/2022. Dorina was born in Romania, on 10/12/1931, to her parents Elena Zamfir and Gheorghe Cioroaba. She grew up in a loving household along with her brother Constantin (Costica), however early in her life she has lost her mother at only age 16. That had a strong impact in shaping the woman that Dorina became later in life. Dorina graduated Mathematics and Physics college in 1954 and has been teaching high school mathematics as long as one can remember, well into her retirement, when she continued tutoring students and preparing them for college. In 1964 Dorina marries her longtime soul mate Zoly and in 1965 their daughter Petronela was born. Dorina’s life was fulfilled both personally and professionally and peaked when her first and only granddaughter Maya Meszaros was born in 2006. This is when Dorina with Zoly relocated to US, to stay along with their daughter, son in law Tibi and granddaughter Maya. During these almost 16 years she spent in US she never stopped helping around the house, cooking and cleaning, and in the same time trying to instill values of honesty, kindness, truth and being a tireless autodidact. Unfortunately her health started abruptly declining and on March 11th late afternoon Dorina gave her last breath, at home, surrounded by her husband, daughter, son in law and granddaughter. The only consolation is that she will be able to hold again her mother’s hand. She was predeceased by her parents Elena and Gheorghe, by her brother Constantin She is survived by her husband Zoly, daughter Petronela, granddaughter Maya, son-in-law Tibi, sister-in-law Aurora, niece Codruta and nephew Codrut.

Elena (Dorina) Szep, beloved wife, mother, mother-in-law and grandmother passed away at home, surrounded by family, on 3/11/2022. Dorina was born in Romania, on 10/12/1931, to her parents Elena Zamfir and Gheorghe Cioroaba. She grew up... View Obituary & Service Information

The family of Elena Szep created this Life Tributes page to make it easy to share your memories.

Send flowers to the Szep family.