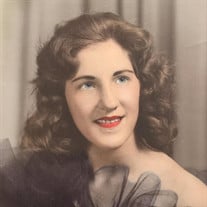 Fonda Hinson Maynor, beloved wife, mother and nana departed this life early in the morning, after battling cancer, on Monday, April 25th, 2022, at Presbyterian Hospital in Matthews, NC. She was surrounded hand in hand by her husband and daughter. Fonda was born in York, SC on October 17th, 1942. She married the love of her life, Jerry Maynor on December 13th, 1975 in South Carolina. She graduated and later received a degree in cosmetology. She also enjoyed working in retail as well. She was devoted to her church and loved singing for Jesus and playing the piano, which she taught herself by ear. She enjoyed cooking for others and will always be remembered for her chicken and dumplings. She enjoyed traveling to the mountains and beach when she was able. Fonda is preceded in death by mother, Faye Manus Hinson, and father, Ernest “Al” Hinson. Fonda leaves behind to cherish her memory, her devoted companion of 46 years, her husband, Jerry Maynor, of Monroe, NC, her daughter, Amber Tykia Benton, and husband, Justin David Benton, of Midland, NC, two granddaughters, Haleigh Piper and Kinsley Grace of Midland, NC, and one sister, Debbie Hinson-Hoffman, and husband, Robert Hoffman, of Indian Trail, NC. She will be deeply missed by her family, friends, and all who knew her. Funeral services will be held on Friday, April 29, 2022, with visitation at 2pm followed by a funeral service at 3pm at 112 Aurora Blvd Matthews, NC 28105 with Reverend Roger Burrows, of Eastwood Forest Baptist Church, officiating. Burial will follow at Forest Lawn Cemetery East Mausoleum at 3700 Forest Lawn Drive Matthews, NC 28104. Arrangements are being handled by Heritage Funeral and Cremation Services in Matthews, NC. Pallbearers will be Justin David Benton, Rick Threadgill, Robert Hoffman, Chad Benton, John Luke Maynor, and Clint Chaney. Flowers may be offered to Heritage Funeral Home and Cremation Services in Matthews, NC. The family of Fonda wishes to extend a sincere thank you for all of the calls, food, visits, love and prayers.

Fonda Hinson Maynor, beloved wife, mother and nana departed this life early in the morning, after battling cancer, on Monday, April 25th, 2022, at Presbyterian Hospital in Matthews, NC. She was surrounded hand in hand by her husband and daughter. Fonda... View Obituary & Service Information

The family of Fonda Hinson Maynor created this Life Tributes page to make it easy to share your memories.

Send flowers to the Maynor family.