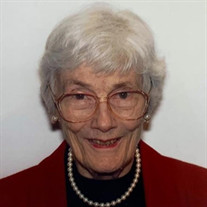 Joan Wakefield Ragland passed away peacefully the morning of Wednesday, March 16, 2022. She was a wife, mother and grandmother during her incredible 98 years. She is predeceased by her beloved husband of 24 years, the late Rawlings Ragland who passed away in 1977, and by her beloved daughter, Susan Margaret Ragland, who passed away in 2001 due to ALS. She is survived by her son, John Rawlings Ragland, her daughter in-law Kathy Haggerty Ragland and by her two grandchildren, Alyssa Ragland and Erica Ragland. Joan was born and raised in Bedford, England. After high school, she became a Legal Secretary and joined the British Foreign Service in London. When World War II began, she was transferred to the Supreme Command Allied English Forces (SCHAEF). After the war, she was transferred to war-torn Nuremburg, Germany where she worked from 1945-1948 during the War Crimes trials of the Nazis. She met her husband to-be, Rawlings Ragland, in 1947 who was deputy chief counsel for war crimes prosecution in the Nuremburg trials and was chief prosecutor of Alfried Krupp. After the Nuremberg trials, she was sponsored by a Senior Partner of the law firm Covington and Burling to come to the U.S. in 1948. She then married Rawlings in 1953 and spent the next 58 years in Bethesda, Maryland. Joan devoted the rest of her life to raising her family in Maryland, traveling the world and volunteering at St. Dunstan’s Church. She moved to Charlotte, North Carolina in 2011 to be close to her son John and his family. A private service and internment will be at St. Dunstan’s Church in Bethesda, Maryland at a date yet to be determined. In lieu of flowers, memorial contributions may be made to the ALS Association of the DC/MD/VA Chapter (The ALS Association DC/MD/VA Chapter). Donations in her name to be used for research, which are the same as her daughter’s wishes at the time of her death.

Joan Wakefield Ragland passed away peacefully the morning of Wednesday, March 16, 2022. She was a wife, mother and grandmother during her incredible 98 years. She is predeceased by her beloved husband of 24 years, the late Rawlings Ragland... View Obituary & Service Information

The family of Joan Wakefield Ragland created this Life Tributes page to make it easy to share your memories.

Joan Wakefield Ragland passed away peacefully the morning of...