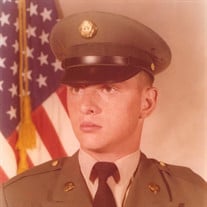 Joseph Blethen III Of Ft. Mill, SC Mr. Blethen, 61, passed away on July 9, 2021. His Mass of Christian burial will be held at 1:00 pm on Tuesday, July 13, 2021 at St. Matthew Catholic Church with Father John Celebrant. Inurnment to follow in the church columbarium with military honors. Joe was born on October 13, 1959 in Oak Hill, West Virginia the only son of the late Joseph and Corine Blackwell Blethen. He graduated from Oak Hill High School in 1977 and enlisted in the US Army upon graduation. During his 6 years of service to our country, he achieved the Distinguished Trooper Award and earned the Expert Infantry Badge as a paratrooper in the 82nd Airborne Division. Joe began his career as an automotive technician after his honorable discharge in 1983. He moved with his family to Charlotte, NC in 1990 to continue his career as a mechanic. Joe enjoyed tinkering and was the best problem solver - always able to fix anything. He enjoyed fishing, restoring his 1972 Chevelle, listening to Bluegrass music, and visiting his buddies at his self-built cabin in West Virginia. Joe was an amazing carpenter and handyman and also enjoyed riding his Harley-Davidson and playing his guitar. He was an extremely devoted son, brother, husband, father, and grandfather and loved spending time with his family. Joseph is survived by his beloved wife of 42 years, Cheryl Dixon Blethen; children, Jennifer Lynn Winton (James) and Joseph Blethen IV (Lisa); sisters, Joyce Alexander and Janet Brellahan; grandchildren, Addison and Ellie Blethen, Michael and Katelyn Rogers, and other relatives and friends. In lieu of flowers, donations may be made to St. Jude’s Children’s Hospital or the American Cancer Society. Arrangements are in the care of Heritage Funeral and Cremation Service-Ballantyne Chapel. Online condolences may be left at www.heritagecares.com.

The family of Joseph Blethen III created this Life Tributes page to make it easy to share your memories.