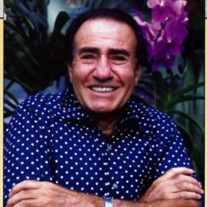 Nish Jamgotch, Jr., Charlotte, NC Mr. Jamgotch, Professor Emeritus, UNC-Charlotte 1932-2021. As a student at the University of Minnesota in 1950, Jamgotch became interested in their new Russian Area Studies program and particularly in the growing potential for U.S. Soviet Conflict. He earned a B.A. and M.A. in Russian Area Studies and went on to military service as a Research Intelligence Analyst in Europe. Advanced graduate work at Georgetown University and the University of California at Berkeley culminated in a Ph.D. in Political Science and International Relations at the Claremont Graduate School in 1964. Throughout his career, Jamgotch explored the often hidden avenues of cooperation that existed between the United States and the Soviet Union- avenues that, in the midst of Cold War tension, decreased the chances of deadly nuclear exchange. He published extensively on this topic, and his research was presented in the 1989 volume, “U.S.-Soviet Cooperation: A New Future.” The culmination of his work came when the Soviet empire crumbled, and the world entered the post-Cold War era. Concerning an earlier 1985 volume, “Sectors of Mutual Benefit in U.S.-Soviet Relations,” George Kennan, Dean of American Sovietologists, addressed the work as “a unique and very valuable contribution to the existing literature on Soviet-American relations.” Jamgotch’s career was also crowned by numerous achievements, including selection as a Hoover Scholar at Stanford University and an associate at Harvard University’s Russian Research Center. He received one of the first ten research grants awarded by the U.S. Institute of Peace, founded by the U.S. Congress in 1984. The grant was for his proposal, “An Academic Network for the Study of U.S.-Soviet Cooperation.” He was also active in professional organizations, chairing the American-Soviet Relations Section of the International Studies Association. In that capacity, he chaired the section’s programs at the 30th annual ISA convention in London in 1989 and the 31st annual convention in Washington, DC in 1990. While Jamgotch’s academic career coincided with the rise and decline of the Cold War, his UNC career paralleled the phenomenal growth of the University. He spearheaded the formative development of the Department of Political Science and of the University’s program in international studies. He also played an organizational role in the Chancellor’s Committee for Peace and Human Survival. He received the NCNB (now Bank of America) Award for Excellence in Teaching in 1971. Over the years, he made several rare and valuable gifts to Special Collections, Atkins Library, UNCC, in memory of his parents Ankena and Nish. Gifts included an Armenian prayer scroll dating from the 1790's, videotaped interviews with Soviet diplomats, and a unique stamp collection commemorating U.S. and Soviet Space achievements. After retirement in 1993, he established the Nish Jamgotch, Jr. Humanitarian Student Award. The endowment granted an annual cash prize to an outstanding UNCC student whose creative achievements most improved the quality of life and well-being of mankind through charitable service, cooperative problem-solving, or conflict resolution. Seven awards were made between 2004 and 2011. Beginning in 2012, this Humanitarian Assistance and Innovation Fund has been administered by the Foundation for the Carolinas. Jamgotch always wanted to be remembered as an avid Eagle Scout, lover of nature, horticulturist, swimmer, tennis player, teacher, and student of world affairs. He is predeceased by his parents, Ankena and Nish, and his sister, Priscilla Kourajran. Survivors include sisters Suzanne Retzler (Kurt Retzler), Wayzata, Minnesota; Diane Koch (Dickran Koch), Palm Harbor, Florida; Carol Jamgotch, Minneapolis, Minnesota; and brother-in-law, Arthur Kourajran. Private interment, St. John’s Episcopal Church, Minneapolis, Minnesota. Memorials may be made to the Nish Jamgotch, Jr. Orchid Room, UNCC, and the Nish Jamgotch, Jr. Humanitarian Assistance and Innovation Fund endowment (Foundation for the Carolinas). Arrangements are the care of Heritage Funeral Home, Ballantyne Chapel. Online condolences may be left at www.heritagecares.com

The family of Nish Jamgotch Jr. created this Life Tributes page to make it easy to share your memories.