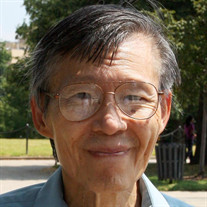 Paul Bih-Shinn Lee left for his heavenly home on October 3, 2021, at the age of 76. After his over 10 year battle with his chronic lung and heart condition, it was finally time for him to join his Lord and Savior, Jesus. Paul was born in a rural poor area of Sichuan Province, China. He was the first child (of 10) to survive through World War II and moved to Taiwan with his parents when he was 4 years old. His father died young, and all hopes were on him to provide for his mom and younger siblings. He continued to excel in school and even tested at the top of his class at Taiwan University where he majored in mathematics. He met his wife at a church fellowship in Taiwan and they have been devoted to each other since their marriage 52 years ago. They moved to Los Angeles, California, in 1970 where he taught mathematics at UCLA. He then obtained a Master’s degree in computer science at West Coast University and became a computer programmer analyst for the next 30 plus years. When his first grandchild was born 16 years ago, he left Los Angeles and moved to the east coast to devote the rest of his life to enjoying and caring for his family and grandchildren. He is well-loved by his 3 grandsons who called him “Papoo.” Reading and learning was a lifelong passion for Paul- he read about anything and everything. He enjoyed his daily devotions with his wife and studying the Word of God with her. He found joy in his church fellowship and discussing with others what he was learning. He made it a goal to read the Bible from Genesis through Revelation each year. He was known for his witty sense of humor, bringing laughter even during times of physical hardship. His near-death lung infection 10 years ago allowed him to bless more people around him and show God’s glory through His miraculous healing. Paul often replied “I feel good” and “God is with me” when asked how he was doing, even until his last breath. Surviving him are his wife Ann Lee, his son John Lee and his wife Jasmine Lee. His daughter Jenny Lee Chen, and her husband Alexander Chen. His brother Bih-Chun Lee, his sister Bih-Zin Lin, and his grandchildren Calvin Chen, Elijah Chen, and William Lee. Paul will be remembered for his love and devotion to his wife and family. He persevered through socioeconomic and physical hardships with a deeply rooted, unwavering spiritual faith in the Lord. He fought the good fight and has finished the race and kept the faith. 2 Timothy 4:7 Funeral service will be held on Sunday, October 10th, 2:30 PM at Grace One Church, 2609 Chestnut Ln, Matthews, NC 28104. The service will be livestreamed for those unable to attend and can be accessed at : https://youtu.be/c_AZVAIUc50 For those attending, masks will be required. Burial will follow at Forest Lawn East Cemetery. Those wishing to honor Paul's memory, may consider making a memorial contribution to Grace One Church https://www.em.graceonecharlotte.org/giving

Paul Bih-Shinn Lee left for his heavenly home on October 3, 2021, at the age of 76. After his over 10 year battle with his chronic lung and heart condition, it was finally time for him to join his Lord and Savior, Jesus. Paul was born in... View Obituary & Service Information

The family of Paul Bih-Shinn Lee created this Life Tributes page to make it easy to share your memories.

Send flowers to the Lee family.