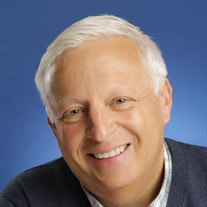 It is with great sorrow that we announce the passing of Ralph Michael Ricci, 72, on Sunday, August 29, 2021. Ralph was born January 15, 1949, in Ossining, New York to Ralph A. Ricci and Ruth McGee Ricci. His parents, he, and his two brothers lived in Croton on the Hudson and Ossining, New York until the family moved to Youngstown, Ohio in 1966. Ralph met his wife, the former Christine (Chris) Kelly, when Chris worked at S.S. Kresge Co.’s lunch counter in 1968. They were married October 1970 and moved to Spain for three years when Ralph served in the U.S. Navy as a Communication Technician. In 1971, their eldest daughter, Jennifer, was born. In 1973, Ralph was honorably discharged, and the family moved back to Youngstown, where Ralph completed his Bachelor of Science in 1976 and a Master of Science in 1979, specializing in Criminal Justice at Youngstown State University. The couple had their second daughter, Amy, in 1975. Ralph worked and served as a case manager and finally as Court Administrator at Mahoning County Juvenile Court for 25 years. Ralph retired from the Court in 2000. He and Chris moved to Indian Trail, North Carolina in 2009 to enjoy time with their grandchildren. In his semi-retirement, Ralph became a realtor and enjoyed helping people find their homes in both Ohio and North Carolina. Ralph was a dedicated husband marked by his 50th wedding anniversary to Chris in 2020. The two shared a dedication to their family and each other. They enjoyed traveling to all parts of the world and Italy was a favorite destination. Ralph enjoyed spending time with family and friends. He was known especially for his Christmas Eve feasts and entertaining, cooking and his making fancy mixed drinks for many occasions. Self-described as having a quiet faith, Ralph was a dedicated Catholic, and often served on church counsel and was a Eucharistic minister. He enjoyed photography, loved his two Westie pups, Poppy and Rosie, and was an avid pen collector, making his family fight over pens at his well-known pen giveaways. He was a huge proponent of other Ralphs’ successes. So much so, he probably assisted in Ralph Lauren’s fortune by buying Lauren’s clothing for years. He loved politics, but more important was his love of Country and justice, liberty and dignity for all. He had a wonderful dry sense of humor. He gave great advise, and he truly was the patriarch of our small family. He will be dearly missed by his wife, Christine Kelly Ricci; daughters: Jennifer Ricci and Amy Ellis; son-in-law, Donny Ellis; grandchildren, Brennan and Neena Ellis; mother, Ruth McGee Ricci; brother John Ricci and sister-in-law, Kathy Ricci; in-laws: Jack Kelly, Barbara and Chuck Hunter, Bill and Martha Kelly, Betsy and John Matey, and Susan and Jimmy McMahon; and nieces, nephews, cousins and close friends. Ralph was preceded in death by his father Ralph A. Ricci and brother, Terry Ricci. His family would like to thank Union County Hospice for their compassionate care of Ralph. Family and friends may call from 1:00 to 3:00 pm on September 2, 2021, at Heritage Funeral Home 3700 Forest Lawn Drive, Matthews, NC 28104. Funeral services will be officiated by Father Paul Gary on September 3, 2021 at 1:30 pm at the St. Luke’s Catholic Church, 13700 Lawyers Rd., Mint Hill, North Carolina. The service may be viewed on St. Luke’s You Tube Channel. A memorial service in Youngstown, Ohio will be announced at a later date. Due to the current COVID-19 health situation, the family is asking everyone in attendance to please wear a face mask and maintain all social-distancing guidelines (6-foot apart). Thank you. In lieu of flowers, donations may be made in Ursuline Sisters HIV/AIDS Ministry, 4280 Shields Road, Canfield, Ohio 44406 and Catherine’s House, 141 Mercy Dr., Belmont, NC 28012.

It is with great sorrow that we announce the passing of Ralph Michael Ricci, 72, on Sunday, August 29, 2021. Ralph was born January 15, 1949, in Ossining, New York to Ralph A. Ricci and Ruth McGee Ricci. His parents, he, and his two brothers... View Obituary & Service Information

The family of Ralph Michael Ricci created this Life Tributes page to make it easy to share your memories.

It is with great sorrow that we announce the passing of Ralph...