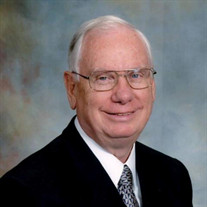 Robert (Bob) Eugene Howell of Charlotte joined our Lord and Savior on May 8, 2021. Bob was born to the late Harris and Sue Howell of Jackson, Michigan on March 30, 1939. He attended Georgia Institute of Technology and received his Bachelor of Science in Engineering degree from the University of North Carolina at Charlotte. Bob served 7 years with the US Navy during the Vietnam war in the submarine service aboard the USS Darter and the USS Woodrow Wilson. He then served at the Nuclear Power School as an instructor for 2 years. After his time in the Navy, Bob moved his family to Charlotte where he worked for Duke Energy for 32 years as a Hydro Electric Design Engineer. He played an integral part in the design of Oconee Nuclear Plant, Keowee Hydro Station, Jocassee Pump Storage Station and Bad Creek Pump Station. Bob was also actively involved with the development of the Catawba and the McGuire Nuclear Stations. He retired from Duke Energy on March 30, 2001. Following his retirement, Bob enjoyed traveling the world with this wife and extended family. In July of 2014, Bob suffered a stroke that curtailed the traveling he loved. Bob is survived by his beloved wife of 58 years, Emma Howell of Charlotte; his two children, Cynthia (Cindy) Markey and David Howell, both of Charlotte; two grandchildren Chandler (Chad) Markey of Charlotte and Christina Markey of Boston, MA. He is also survived by his brother, James Howell and his sister Katie Fields, both of Cartersville, GA. Preceding him in death, in addition to his parents, was his sister, Libby King. Visitation for family and friends will be held on Friday, May 14, 2021 from 1:00PM until 1:45PM with funeral services beginning at 2:00PM in the Chapel at Calvary Church. Burial will follow the service at Magnolia Memorial Gardens at the Church. In lieu of flowers donations may be made to Calvary Church, 5801 Pineville Matthews Road, Charlotte, NC 28226-3447. Arrangements are in the care of Heritage Funeral Home, Weddington Chapel. An online guestbook is available at www.heritagecares.com.

Robert (Bob) Eugene Howell of Charlotte joined our Lord and Savior on May 8, 2021. Bob was born to the late Harris and Sue Howell of Jackson, Michigan on March 30, 1939. He attended Georgia Institute of Technology and received his Bachelor of... View Obituary & Service Information

The family of Robert E. Howell created this Life Tributes page to make it easy to share your memories.

Send flowers to the Howell family.