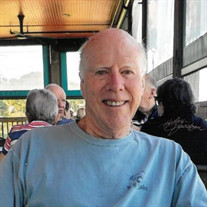 Robert Charles Hunt, Jr., known by family and friends as Bob, 76, of Charlotte, passed away on November 6, 2021 at Atrium Health Carolinas Medical Center in Charlotte. He was the son of Lila Hunt and Robert C. Hunt. Bob was born on June 28, 1945 in Charlotte and remained here his entire life. In 1963, Bob graduated from Myers Park High School and went on to obtain his Associates Degree from Wingate College. He was a proud Veteran of the Special Forces 82nd Airborne Reserve Unit of the United States Army. Shortly after high school Bob began dating his best friend and the love of his life Janice Benner. They had enjoyed 50 wonderful years of marriage at the time of his passing. Carolina Shows, Inc. was founded in 1983 by Bob and he worked daily with his wife and his son, Russ. Bob also founded Live Oak Nutrition in Southport, NC working with his oldest son Rob. In addition to his love of trade shows, Bob had a great love and appreciation for music. He played in several area bands in the 60’s and 70’s. Golf was one of his favorite pastimes especially when he was playing with his two sons and his lifelong friend John Lane at Sunset Beach, NC, where he and Janice had a home. One of Bob’s hobbies was to spend time on his boat, Done Talkin’. Bob’s great faith and trust in God helped to guide his life’s journey. He loved sharing his faith and people saw that in him. He was a great friend, loving father and devoted husband. Playing with his grandpuppy “Ellie” brought Bob joy. In addition to his wife Janice Benner Hunt, Bob is survived by his son Robert C. Hunt, III and his wife Angela Beeson Hunt and son Russell Jeffrey Hunt and his wife Binh Tran Hunt. Grandchildren Annabella, Amelia and Jackson will miss their Bogie but will hold onto the Legacy he created. The family would like to extend a special thanks to his doctor and friend, Dr. Edward Knish. Memorial Contributions may be made in Bob’s memory to the charity of your choice. The funeral was held at Matthews Presbyterian Church on Wednesday, November 10, 2021 and he was laid to rest at Forest Lawn East Cemetery in Matthews with military honors. Heritage Funeral Home was honored to serve the Hunt family.

Robert Charles Hunt, Jr., known by family and friends as Bob, 76, of Charlotte, passed away on November 6, 2021 at Atrium Health Carolinas Medical Center in Charlotte. He was the son of Lila Hunt and Robert C. Hunt. Bob was born on June 28,... View Obituary & Service Information

The family of Robert C. Hunt Jr. created this Life Tributes page to make it easy to share your memories.

Send flowers to the Hunt family.