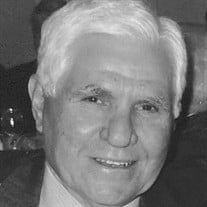 Thomas Everett Belk passed away at home on May 30, 2021. Born in Lake City, Arkansas on March 29, 1938, he was adopted by Charles and Susie Belk and grew up in Camden, Arkansas. Tom had very fond memories of his early years growing up with lots of freedom to explore the countryside. He enjoyed fishing, hunting, camping, and exploring the backcountry along the Ouachita River. He graduated in 1954 from Fairview High School, where he played football, co-founded a chapter of the Arkansas Archeological Society, and fell in love with his future wife, Alma Ruth McDonald. Tom and Alma married on July 4, 1959. Tom attended Arkansas A&M College and earned a BS degree in Chemistry with a minor in Physics and Mathematics. He served in the National Guard and was placed on standby duty when it was federalized to ensure the integration of public schools in Little Rock, Arkansas. He worked in engineering, designing filtration systems for various companies and then in government. From 1972 – 2003, he worked for the federal Environmental Protection Agency and was instrumental in developing the regulations for the brand new Safe Drinking Water Act. Tom particularly liked working with the National Rural Water Association and rural water systems to implement the new rules. He was proud of his role in protecting drinking water nationwide. Tom was a genuinely curious person with wide-ranging interests. He was a passionate reader (usually had several books going at once and underlined as he went) and lifelong student of American History. He taught himself woodworking and designed and built furniture for his home and for friends and family. He liked traveling with Alma to small towns and historic sites, and to National Parks around the country. He loved taking regular family trips to the beach with his children and grandchildren. He took a lot of photos! Tom was an active church member, serving as Deacon Chair and Sunday school teacher at Cresthill Baptist Church in Bowie, Maryland, and as substitute Sunday school teacher at Matthews United Methodist in Matthews, NC. People who knew him in these roles considered him to be wise and generous with his time and counsel. Tom was popular with children, dogs, and adults. He liked to joke and showed genuine interest in people during his day-to-day interactions. People all around town recognized him and were happy to see him again. He was a proud and devoted husband, father of 4 and grandfather of 7. He regularly and freely told each of his family members that he loved them. There was never a doubt that it was true. He is survived by his wife of 61 years, Alma Belk; brother Steve Belk and wife Judy Belk; children Jennifer Belk and husband Robert Jones, Debbie Inskeep and husband Todd Inskeep, Tom Belk and wife Donna Belk, Andy Belk and wife Stephanie Belk; grandchildren Jennifer Inskeep, James Inskeep, Zachary Belk, Madison Belk, Elliot Jones, Shelby Belk, Corey Belk and wife Megan Belk. Funeral service will be 11:00 a.m., Thursday, June 3, 2021 at Matthews United Methodist Church; 801 S. Trade Street, Matthews, NC. The family will receive guests one hour before the service. In lieu of flowers, donations may be made to: (1) Global Impact Mission of the Matthews United Methodist Church. Online at http://globalimpactmumc.org/ or by check payable to MUMC (designate Global Impact Mission); or (2) Alliance Center for Education, 700 Parkwood, Charlotte, NC 28205 (Attn: Kim Lenz). Family is in the care of Heritage Funeral Home, Weddington Chapel.

Thomas Everett Belk passed away at home on May 30, 2021. Born in Lake City, Arkansas on March 29, 1938, he was adopted by Charles and Susie Belk and grew up in Camden, Arkansas. Tom had very fond memories of his early years growing up with... View Obituary & Service Information

The family of Thomas Everett Belk created this Life Tributes page to make it easy to share your memories.

Send flowers to the Belk family.