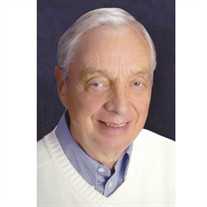 Warner Wilson Behley, 91, passed away unexpectedly in his apartment at the Windsor Run Senior Living Community, Matthews, NC on Wednesday, July 14, 2021. Born in New Haven, Connecticut, he was the only child of Rudolph and Katherine Behley. He was preceded in death by his parents and his wife of 58 years, Shirley Clouser Behley. Warner graduated from Trinity College with a bachelor’s degree in Economics. He earned his Master of Business Administration from the Wharton School of the University of Pennsylvania, followed by two years in the Armed Forces. After marrying in October 1956, he lived in Winston-Salem, NC; Chicago, IL; Pittsburgh, PA (where he became a lifelong Steelers fan); and Columbus, OH. After retiring in 1998, Warner and Shirley enjoyed many years in their custom-built home in the Kenmure golf community in Flat Rock, NC. A few years after his wife’s death, Warner moved to Windsor Run in 2018 as a founding resident. He is survived by his three daughters, Lauryn Behley of Charlotte; Marcia Rodda and son-in-law Mark Rodda, also of Charlotte; and Kara Reynolds and son-in-law Mark Reynolds of Phoenix, AZ. He is also survived by two granddaughters, Elyse Reynolds and Leah Reynolds. Warner had a successful career in finance working for various manufacturing companies including RJ Reynolds, Corrugated Box, Hanes, Copperweld, Abex, and ending as Chief Financial Officer for Hagglunds Denison. After moving to Flat Rock, he continued to work as a Financial Advisor for many years. He also volunteered as Grants Coordinator for the Henderson County Habitat for Humanity, where he was awarded Volunteer of the Year in 2014 for his contributions. Throughout his life, Warner was passionate about sightseeing. His first big adventure was a three-month cross-country trip after college graduation. He also visited many cities during his military service in Europe and went on numerous vacations with his family in the US and Canada. Later in his career, he traveled regularly to South America and Europe. For the past 14 years, he enjoyed regular trips with his daughter Lauryn touring countries in Europe, Asia, and the Middle East. He recently achieved his bucket list goal to visit all 50 states, completing a Hawaii trip in March 2020 and an Alaska trip in June 2021. In addition to travel, Warner enjoyed playing golf and bocce; attending plays and musicals; dancing; reading; playing bridge and board games; and socializing with friends. He remained active throughout his life and was still walking two miles a day on the Windsor Run grounds. He was a loving husband, father, and grandfather, and will be missed by all. A celebration of Warner’s life will be held on Friday July 30, 2021 from 4-5:30 pm at Windsor Run in the Willows room. In lieu of flowers, memorial contributions may be made to the Henderson County Habitat for Humanity.

Warner Wilson Behley, 91, passed away unexpectedly in his apartment at the Windsor Run Senior Living Community, Matthews, NC on Wednesday, July 14, 2021. Born in New Haven, Connecticut, he was the only child of Rudolph and Katherine Behley.... View Obituary & Service Information

The family of Warner Wilson Behley created this Life Tributes page to make it easy to share your memories.

Warner Wilson Behley, 91, passed away unexpectedly in his apartment...